Most Common Types of Pond Algae (With Pictures)

Pond algae come in many different types, shapes, and colors. With some forms of algae being more harmful than others.

Identifying the type (or types) of algae in your pond is the first step for effective pond algae control.

So, let's look at what algae actually is, and then look at the most common types of pond algae. We even include pictures of each type to help you easily identify the type of algae in your pond.

What Is Pond Algae?

Despite its appearance, “algae” does not refer to aquatic plants.

In fact, the word algae are plural, with the singular form being “alga”, with the term algae being a catch-all for the many different types.

At one end of the scale, some algae are microscopic, while others (like giant kelp) can be 100 feet long!

While you are unlikely to find giant kelp in your pond, a selection of different types of algae may be present.

While green is the most common color associated with algae, you'll find brown, red and blue/green colors of algae, as well!

No matter the color of algae, the growth process is the same which is controlled by photosynthesis. This simply means that algae need sunlight to grow.

The energy from the sunlight is combined with carbon dioxide and water to produce glucose, providing consumable energy and enabling the algae to grow.

Algae growth is an entirely natural process, but like many things, in nature, it can have an adverse effect on other life in the nearby vicinity. Algae can create water quality issues, deplete water oxygen levels, produce bad smells and may release toxins in the pond water. At its worst, pond algae can kill fish or other animals living in the water it's growing in. It can even be harmful (and cause death) to humans and pets!

Some types of algae in ponds don’t necessarily cause a direct problem to the health of pond-dwelling animals but may cause a change in the appearance. In other words, not all algae will have a negative effect on your pond or lake, but we’ll look at that in a little more detail below.

What Are the Types Of Pond Algae?

Let's look at the 5 most common types of pond algae and learn a little bit about each, including which types are good and bad for your pond. We also include pictures for easy pond algae identification. The algae you are most likely to see is the free-swimming type. The color of this algae may vary but the most common type is the one that causes your pond water to turn green. Known as planktonic algae, each individual alga is a single-celled organism.

This kind of algae species grows and reproduces by using sunlight, carbon dioxide, and nutrients. These nutrients can be obtained from a variety of sources, including fertilizer, leaves, and uneaten fish food and fish waste.

Although it is relatively easy to get rid of, this type of algae is often found in new ponds where there is not an established ecosystem to keep it under control. With no aquatic plants or animals to compete for nutrients, it can quickly take hold and grow at speed. On the other hand, filamentous algae and blanketweed is a larger form of algae. You’ll often find it attached to the surface of rocks or the liner at the bottom of the pond and growing into the water in a similar way to a normal plant.

And when you hear the word "pond scum", it's typically in reference to string algae floating on the surface of a pond in mats.

Manual removal of string algae blooms is often the preferred method to begin with as it is too large (and can be too attached) to be removed by UV pond clarifiers. However, this comes with its own problems as manually removing pond scum may cause spores to be released back into the water resulting in the growth of more algae. 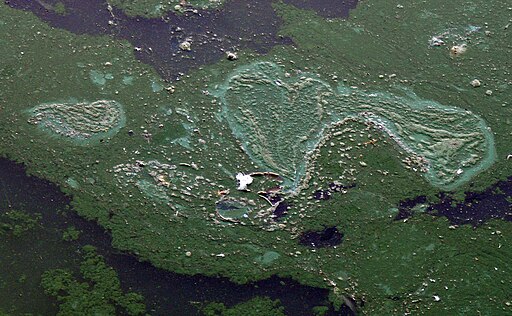 The third kind of algae is actually a bacteria known as blue-green cyanobacteria. It's too small to be seen by the naked eye until it reproduces and grows into a bloom.

Once visible, it can appear as either blue-green or brown muck on the surface of the water, similar to pond scum, and has a strong unpleasant odor.

This type of algae can actually be harmful to your ponds fish and other wildlife as it produces toxins. In fact, the cyanotoxins produced by blue-green algae can pose a threat to humans, pets, and livestock, as well. 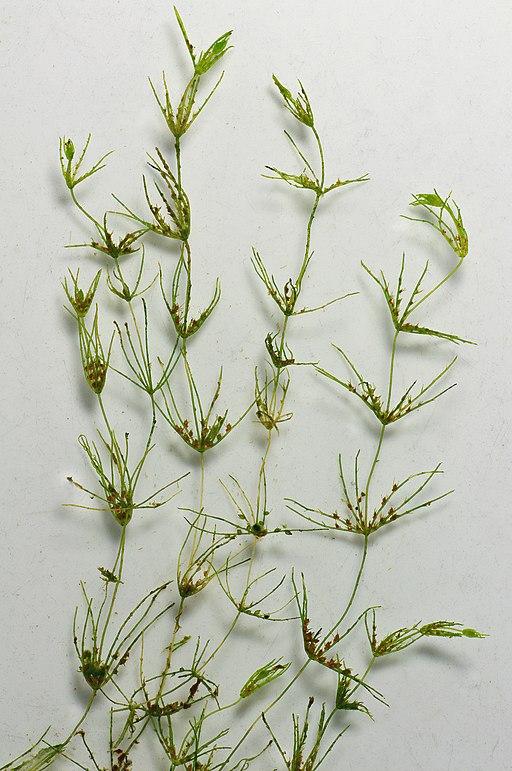 Chara algae, also known as Muskgrass, does not look like your typical algae. In fact, it's often confused for a submerged plant or pondweed.

Chara is a green branched alga that has no flower and will not grow above the surface of the water. You can often identify it by its foul, garlic-like odor and its crunchy texture.

Other than its odor, Chara is not typically bad for your pond and can actually help oxygenate the water and even attract ducks and other wildlife.

Similar to Chara, Nitella algae is often confused for submerged aquatic plants and pond weeds because of it's branched, flower-like appearance with leafy ends. Nitella also will not grow above the surface of the water.

Unlike Chara, Nitella has no odor and is not crunchy. It's softer to the touch.

Nitella algae, commonly known as Stoneworts, typically isn't going to hurt your pond or cause any negative water quality issues. It also has no real food value for wildlife. It can, however, provide cover for insects and invertebrate which are in turn a food source for pond fish like koi, waterfowl, frogs, and other wildlife.